Fleece flower root, the Chinese wonder herb that was in news for taking human shape, is hailed as a natural herbal remedy for various health problems. Fleece flower root or he shou wu as it is also called, is thought to improve blood circulation and the functioning of the kidneys. It is also said to be good for detoxification, constipation and irregular menstruation, among other things.

Legend has it that an old Chinese gentleman got lost in the forest where he started to eat the root of a certain wild plant. This caused his hair to turn black from white. When he was reunited with his tribe, everyone was so astonished with the change in him, that the root remedy came to be named after him. Today this herbal remedy is an integral part of TCM or Traditional Chinese Medicine. It is used as a remedy for treating hair fall and baldness, for premature graying of hair and also for reducing other signs of aging.

How effective is fleece flower root? 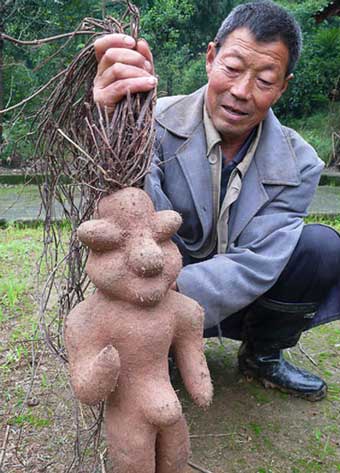 The understanding is that fleece flower root extract helps hair growth by improving blood circulation. There do not appear to be very many large or reliable scientific studies on the subject of efficacy of fleece flower root for hair re growth or reversal of graying hair. Some product websites do however claim pharmacological studies that showed improved cardiovascular functioning due to their product. There is anecdotal evidence of the efficacy of this herbal remedy, and users and reviewers claim to have derived benefit to varying degrees. Users have claimed that it has improved their hair growth and that it thickens the hairline.

Possible side effects and other problems

Some products that are marketed as natural herbal medicines based on fleece flower root may contain some toxic ingredients such as lead. In addition, some users report to experiencing severe stomach pains and diarrhea some time after having started on the pills. It is not advisable to take this over a long duration since it can, in some cases, cause liver problems. It is important not to implicitly place trust in any remedy simply because it is labeled as herbal. There is no regulation of the use of the terms ‘herbal’ or ‘natural’. Do your own research; find out more about the ingredients and contraindications if any. Consult your doctor as to its safety and advisability and only then use it.

We use cookies to ensure that we give you the best experience on our website. If you continue to use this site we will assume that you are happy with it.OkPrivacy policy